Christmas Rose is one of Holy Family's longest standing traditions, having been celebrated since 1954.

The Story of the Christmas Rose

The story of the Christmas Rose comes from the legend of a poor little girl who stood outside the stable where Jesus was born, crying because she had nothing to give the Christ child. An angel saw her despair and turned each teardrop into a Christmas rose for the girl to give Jesus.

While the celebration of Christmas Rose at Holy Family has evolved over the years, it is one of the most beloved and memorable holiday events of alumni and students alike.

Christmas Rose Through the Decades - The 1950s 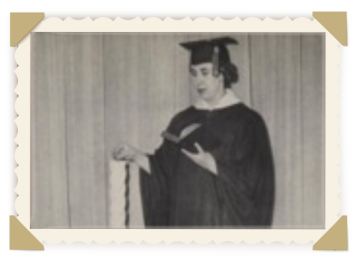 The very first Christmas Rose was held on December 17, 1954. The celebration was hosted by Student Government and served as a final gathering before students went home for the holidays.

The traditional celebration began with solemn lighting of the Candle (symbolizing “the King of Love and Light”) and included the harmonized singing of the Christmas Rose hymn, Gesu Bambino. Students wore their academic regalia to this special Mass and celebration.

The Christmas Rose festivities continued with a candle-lit and rose-scented supper in the cafeteria, a performance by Holy Family’s drama troupe, the Genesiennes, and a Christmas gift exchange of secret Pollyannas as well as “Big and Little Sisters” –special pairings of upper and lower classmen. 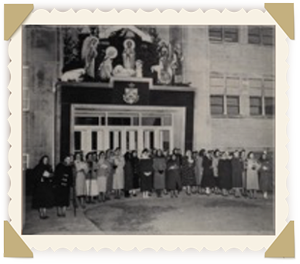 And, as reported in the 1958 yearbook, “because everyone was overflowing with the warmth and peace of the Yuletide, there was nothing else to do but to let it overflow, in song, over the campus, the neighborhood, and surprised but delighted passers-by.”

Carolers gathered and sang their first songs outside of Holy Family Hall beneath Sister M. Plautila's Nativity creche before beginning their singing tour of the campus and neighborhood.

Gini (Fleuhr) Campbell ’60 recalls this tradition with a smile, “We sang to anyone who would listen!.”

The tradition was firmly established! 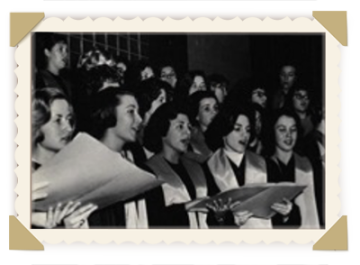 Christmas Rose kept most of the established traditions throughout the decade. Some changes introduced included having members of Student Government serve the Christmas Rose meal, organizing a campus-wide Christmas card exchange prior to the event, and advent celebrations.

Christmas Rose entertainment was one area that blossomed in this decade. Guests enjoyed performances by the very popular Glee Club (under the direction of Mr. Herbert Fiss), a newly formed Symphonette orchestra, and the Genesiennes provided a new play each year, often including male performers from neighboring colleges.

The most exciting addition was the singing of the school’s new official song, the Alma Mater, which was written by MaryAnn Scarano Hughes ’64 & Mary Ann Wuskle Ferland ’64 (and approved by Mr. Herbert Fiss).

By the end of the decade, the formal Christmas Rose dinner was replaced with a buffet. Alumnae from this time also remember having a signature “Christmas Rose” drink with their meal. 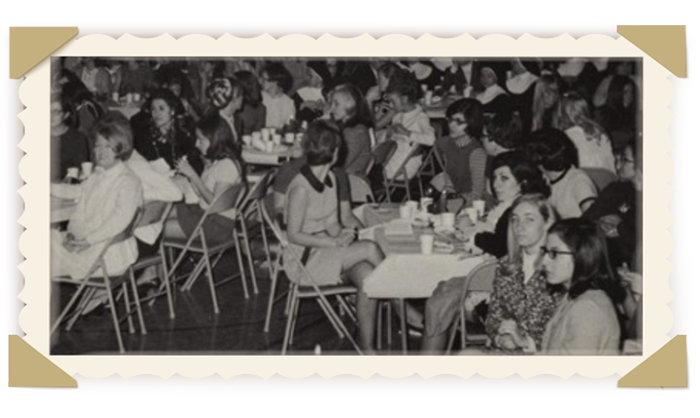 Christmas Rose, like many other things at Holy Family in the 1970s, was marked by change.

The traditional recitals of the Glee Club and Genesiennes evolved into a larger variety show. The show included skits and performances by all members of the entire campus community, including some faculty and staff members. The newly-accepted male students at Holy Family added some diversity to these performances, especially when Santa arrived!

Christmas Rose continued to be a staple of the holiday season at Holy Family.

Sponsored by Student Government Association (SGA), Christmas Rose consisted of Mass (including reciting the legend of Christmas Rose), a buffer-style dinner, and a show. The performances included singing, dancing, comedy routines, and more. 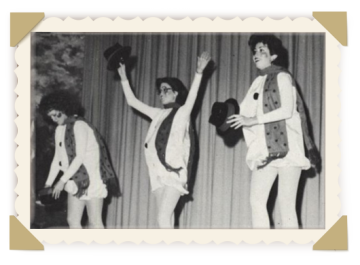 Mr. Bill’s nemesis was Sister Sluggo. We showed it at Christmas Rose, doing the narration real-time. The audience was most appreciative. Sue and I also did a recap of our memories of Holy Family while I sang the song “The Way We Were.”

Jim Duffy '82 made an appearance as Santa ; the Sassy Snowmen (a group of talented Nursing students) did a choreographed number in costume; and other students sang and it skits. It was a great time for the entire Holy Family community.”

By the end of the decade, the community was thrilled to host Christmas Rose in the newly constructed Campus Center (then called the College Center) instead of Holy Family Hall canteen and auditorium. The new Tiger mascot made an appearance to spread extra joy, too! 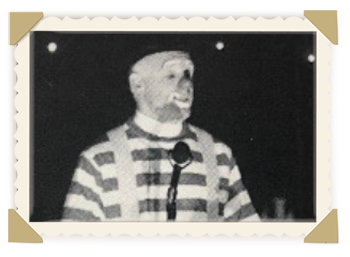 Forty years after its inception, Christmas Rose continued to unite members of the Holy Family during the holiday season.

Events included Christmas Rose mass (celebrated by Father Al Smith, OSFS), dinner, and the show – all hosted by Student Government. The Christmas Rose show featured performances from many different clubs and organizations on campus, faculty and staff members, and Santa always seemed to make time in his schedule to attend, too.

Some of the most exciting performances from this decade included the re-established Holy Family Choir, KISS-impersonators, the Holy Family Village People, Symfunny the Clown (aka Father Al), a barbershop quartet, and so many more.

Making the event extra significant, some years also included a special thank you presentation by students to Sister Patrice Feher, CSFN, ’66. Sister Patrice was the moderator of SGA and had served in the role for many years. Christmas Rose’s legacy is no doubt a success because of her guidance through the years! 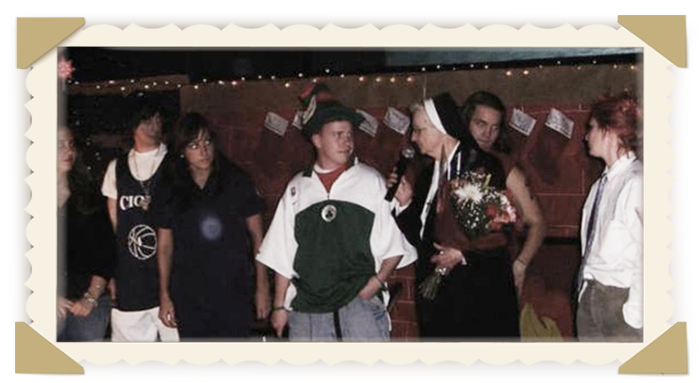 In the new millennium, Holy Family College may have grown into Holy Family University, but Christmas Rose was just as special as ever.

The tradition of Christmas Rose Mass, a dinner buffet, and a show remained the same; however, the guest list became larger than ever. In addition to Holy Family’s large student body and the return of resident students to campus, there were hundreds of alumni, faculty, and staff members who attended this event each year.

Towards the end of the decade, when alumni tickets weren’t available, alumni would host their own “Christmas Rose Reunions” off-campus to commemorate this special event. 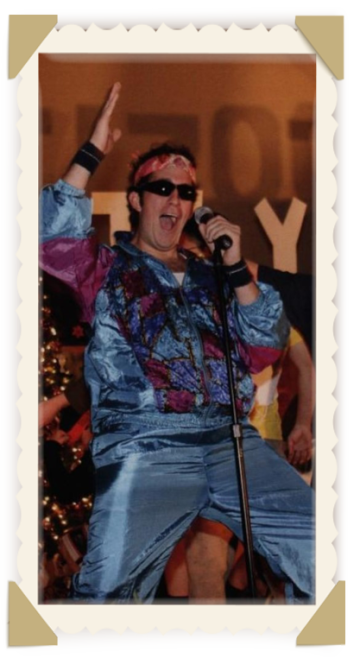 Despite many, many changes over the years, Christmas Rose remains one of the longest and most special traditions at Holy Family.

Throughout this decade, guests still enjoyed the traditional Christmas Rose events: Mass, the legend of the Christmas Rose, dinner, and a show – all hosted by Student Government.

In addition to some amazing performances throughout the decades, including a smashing performance by the boys of SGA to Mariah Carey’s All I want for Christmas is You, one moment stands above the rest. During Christmas Rose 2016, Mike Ulrich ’11, M’16 proposed to his girlfriend, Nicole Keller ’12, M’15! The entire audience (including Mike’s and Nicole’s families) were excited to be a part of this special moment for one of our most special alumni couples. Nicole said yes! 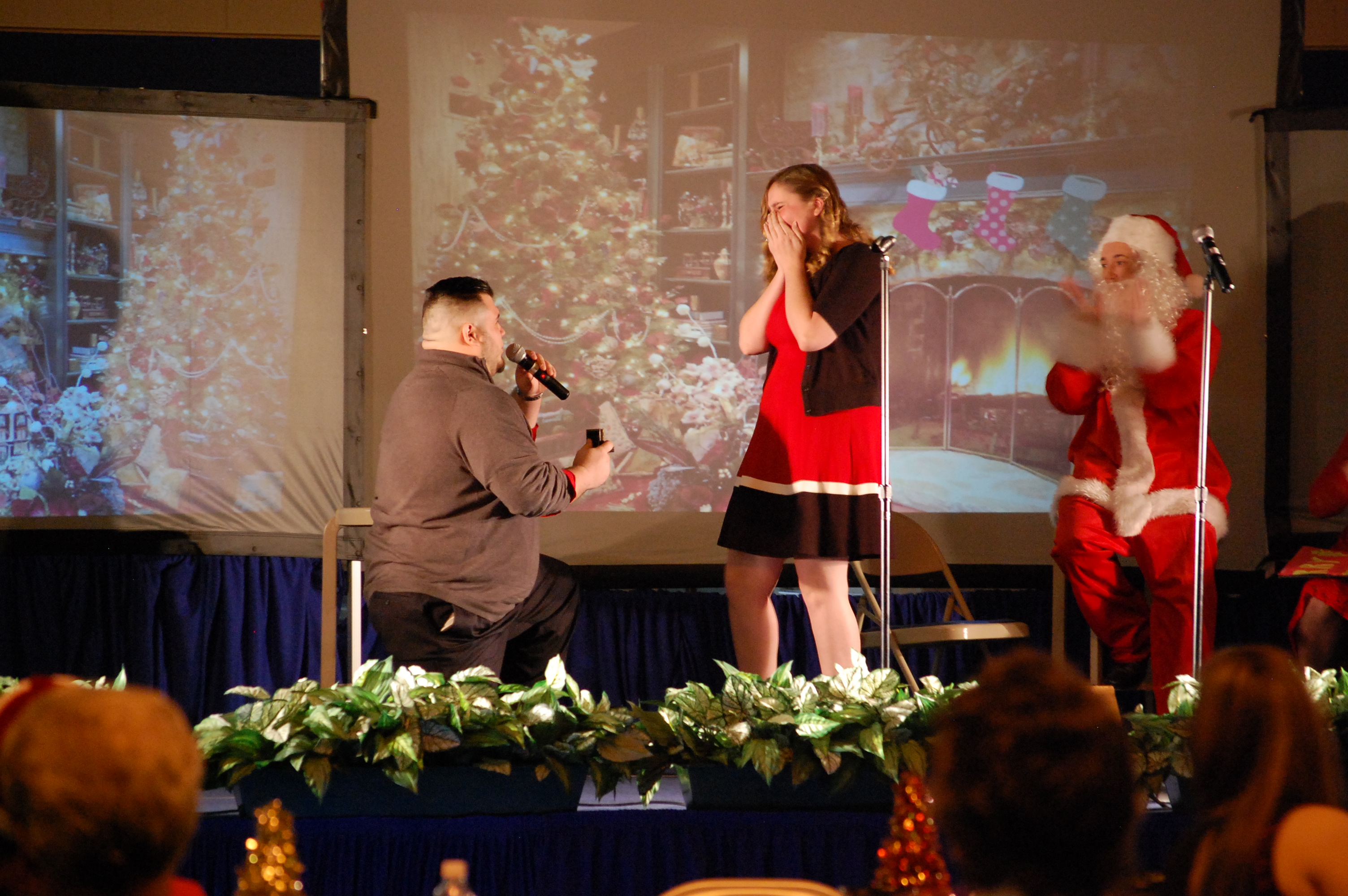 Despite the pandemic (and after), Christmas Rose continued in a slightly different format.

When the campus was unable to gather together in person, students rose to the challenge to keep the tradition alive. On Friday, December 4, 2020, SGA and the Alumni Office hosted the virtual “Christmas Rose: Home for the Holidays” event via Zoom. In addition to a livestream of Christmas Rose Mass (celebrated by Father James MacNew, OSFS), members of the campus community had submitted their recorded performances which were played during the webcast.

The event was enjoyed by the campus community and alumni from their homes all across the country – including many members of our Golden Alumni Society who fondly recalled Christmas Rose in the 50s and 60s in the Zoom chat. Holy Family pride was at a record high during this evening!

At present, the Christmas Rose tradition is celebrated with the Nativity & Christmas Tree Lighting, which includes caroling across campus (like the 50s!) and a celebration of Christmas Rose’s history at Holy Family since 1954.