In honor of Black History Month, Holy Family University is sharing the stories of Black Catholics who have been declared venerable and have been put forward in the canonization process that could lead to Sainthood. 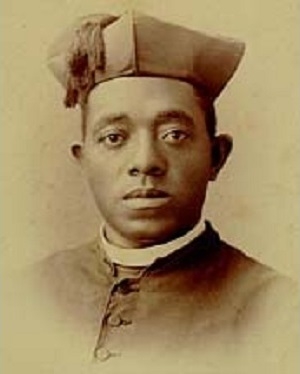 Born into slavery in Missouri in 1854, Tolton was raised Catholic. During the Civil War, he escaped slavery with his mother and two siblings to Quincy, Illinois, where Tolton was permitted to attend an all-white parochial school by a priest, Fr. Peter McGirr, who recognized Tolton's commitment to his religion and education. The decision was faced with controversy among parents of the other students, and Tolton faced additional discrimination later when no seminary in the United States would accept him.

Instead, McGirr helped Tolton gain acceptance into the Collegium Urbanum de Propaganda Fide seminary in Rome. In Rome on East Sunday in 1886, Tolton became the first Roman Catholic priest publicly known to be black at the time that he was ordained.

Returning to the Quincy, Tolton was challenged by continued discrimination when trying to form a parish and participate in the growing Catholic community. Moving to Chicago in 1889, he became the pastor of St. Monica's Catholic Church, which primarily served Black parishioners. As the pastor of St. Monica's, Tolton led the parish through significant growth in the face of prejudice. He worked tirelessly to raise money for the construction of a new church to house his growing parish, which was completed in 1893.

After serving as a priest for a little over a decade, Tolton passed away in 1897. In 2019, Pope Francis named Tolton Venerable.