Dr. Jen DeCicco has contributed research towards the Registered Replication Report of Strack, Martin, and Stepper’s original facial feedback hypothesis, which has been published by the Association for Psychological Science. 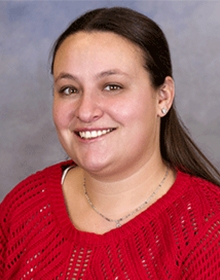 In the team’s original research about the facial feedback hypothesis, “people’s affective responses can be influenced by their own facial expression (e.g., smiling, pouting), even when their expression did not result from their emotional experiences.”

“My background is in emotion and emotion regulation research and my colleague, Dr. Jennifer Talarico from Lafayette College, also has an interest in emotion,” DeCicco said. “We thought it would be a great opportunity to be involved in a project that would not only bring together our interests, but also to provide additional information about a well-known and interesting phenomenon. The original paper is cited in many textbooks and though it is an interesting phenomenon, it was never replicated. We teach our students in our courses that it is important to be able to replicate our research, so that we know what we have found is reliable. The initiative from the Association for Psychological Science serves to demonstrate whether this work is indeed able to be replicated in an open format. That is, the data, materials, and other information about the experiments and labs where the experiments were conducted are available on the Open Science Framework for anyone to access.”

In the study, participants held a pen in their mouth with their teeth, which would produce a smile, and again with their lips, which would force them to pout. While doing so, the participants were asked to rate how funny a cartoon strip was. The results showed that those with the pen in their teeth found the comic strips funnier than when holding the pen between their lips.

“The Registered Replication Reports serve to understand whether research is able to be replicated—that is, can we find the same or similar results as the original research report,” DeCicco said. “In this Registered Replication Report, 17 laboratories from all over the world conducted the same experiment, in an attempt to replicate the work of Strack and colleagues, specifically the facial feedback hypothesis. This is a concept that suggests our facial expressions can influence our perception or mood. For example, if you are smiling or engaging the muscles in your face involved in smiling, then this might make you think a joke is funnier than if you are engaging muscles involved in a frown or negative facial expression.”

Working alongside Talarico, the pair collected data that involved participants holding a pen in their mouth that would engage muscles involved in smiling versus pouting. DeCicco and Talarico trained their research assistants to perform the experiment and collect the data, and then submitted their findings to the Replication Editors in charge of the larger set of analyses.

“It took approximately seven months to set up the experiment in the lab, collect the data, and submit the data for final analyses,” DeCicco said. “Our research assistants were phenomenal and played a big role in ensuring the collection of the data went smoothly and completed in a timely fashion. We spent a good amount of time reviewing the protocol for the experiment, how to troubleshoot, and trying to anticipate questions that participants could have before, during and after the experiment. Practice experiments/trials were some of my favorite parts of the experiment. Seeing students master the experiment and execute the experiment with great precision was really fulfilling.”

According to DeCicco, in the end, a large majority of the labs failed to replicate the original results of the original experiment.

“The meta-analysis of the 17 laboratory sites found no differences between how those participants in the smile versus the pout condition in funniness ratings of the cartoons,” she said.