Getting to Know: Dr. Madigan Fichter

A new Assistant Professor teaching History in the School of Arts and Sciences, Madigan Fichter, Ph.D. brings vast knowledge about Eastern Europe and the Balkans to the classroom. 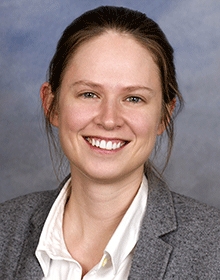 She sat down with Holy Family University to discuss her background, her struggles with the foreign research archives, and her current taste in music.

Can you tell me about your background and what brought you to Holy Family University?

I received my Ph.D. from New York University in History. I specialize in Eastern Europe and the Balkans. I specifically work on the socialist period and I write about 60s counter culture and student protest movements in the Balkans during that time.

What sparked your interest in that particular region?

My interest was first peaked after watching this crazy counter culture movie from the 70s that was made in Yugoslavia. I was really fascinated by the idea that there would be counter culture and student protest movements in the socialist world, not only in the west. The stereotype is that students in Chicago or Paris, including the May 1968 incident in Paris, are the big iconic moments of the global 60s. But this was also happening in the socialist world.

Besides studying this era of history, are there any additional areas of history that fascinate you?

The Balkans is my area of specialization. Generally speaking, I think of myself as somebody who works on Europe, who thinks about Europe in the world. I like to think I study Europe at its largest extent.

Students today are used to a fast-paced high-tech learning experience. How can you incorporate some of that into your lessons about history?

Something I think is really essential to what I do in the classroom is use technology. Sometimes we will watch a small clip of a documentary that will show us the architecture of an Aztec city. Sometimes it’s a whole film. In the course I am currently teaching on social movements, we are watching a film about the Algerian War in the 50s and 60s. The movie itself is a historical source, but it is also a way to have a visual representation of what history looked like. I sometimes try to incorporate music and I try to bring in a lot of primary source documents as something to get a discussion going. These give us more of an inside look of what it meant to be from that period.

You’re currently working on a book manuscript titled Balkan Underground: Counterculture and Student Rebellion in Southeastern Europe, 1965-1975. What can you tell us about it?

My big goal for the summer is to try and hammer out a pretty solid draft to get a book contract going. It’s about the counter culture and student activism in the 1960s. One of the big ideas I’m interested in is trying to use this as a way to argue that the Balkans isn’t this weird outlier that doesn’t quite fit in to Europe—that is somehow out of the normal flow of history. The usual way of perceiving the Balkans is that it’s a bunch of crazy people who want to kill each other and don’t know anything else. However, we see that they are sophisticated counter cultures that are every bit engaged in the world as anyone else. I’m trying to show that the Balkans are part of the world, part of history, and that they’re an important part of European history. The west is not the only way that we can understand counter culture. I’m trying to decentralize the west as the gold standard for how we understand student protest in the 1960s.

With such a fascination in Eastern Europe, the Balkans, Romania. and Yugoslavia, have you ever had a chance to travel to these locations and what was that experience like?

I’ve spent a considerable amount of time doing research in the Balkans. It’s always exciting and challenging. They’re not always the easiest countries to do archival research in—for example, ex-socialist secret police archives are not the most straight forward to use. But I also did a lot of oral history, which meant that I went and interviewed a lot of former student protestors. It’s something that I find truly fascinating. At the end of the day, the stories that you find while tracking down documents and finding the right people to talk to is the thing that keeps me excited about what I’m doing.

HFU: Outside of the classroom, what are some of your hobbies?

MF: “I’d say that I am a pretty passionate music fan. I love music. I’m a very big blues fan, so I like the old blues guys. I’ve been on a Billie Holiday kick, so I guess I have some interest in jazz as well. I am very into film, and there is a film festival happening right now that I wish I was at because it combines all of my interests. It is about films from the jazz age, so it would be really cool to check that out if I have the time.”