Behind the makeup of popular corporate apps are lines of dizzying code, designating what, where, and how the application will function for the consumer. 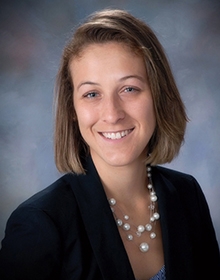 As a Pre-Med major in 2010 at a different university, Beck took a technology course as a requirement of her program, with the idea that technology and the medical world were closely intertwined. The course, Introduction to Computer Science, taught the theory and understanding of design patterns and programming language. That class sparked a passion for building and coding in the illustrious app world, where Beck is an iOS Engineer for Philadelphia-based Tonic Design Co.

“I took a technology course and honestly fell in love with the theory and understandings on design patterns and languages,” Beck said. “Being a Pre-Med major, I was not always interested in programming and becoming an engineer, but I did have a hobby for technology in general. I always had to have the new thing that came out that year.”

After switching colleges and her career trajectory, Beck, a Computer Management Information System major while at Holy Family University, now designs, architects, and develops mobile software for Apple’s iOS—working on building applications and software for clients such as Johnson & Johnson and Abercrombie & Fitch.

“Holy Family was close to home and I had relatives that went there and graduated—so it came highly recommended,” Beck said. “I liked the fact that the CMIS program was a mix of technology and the business behind such a growing career path. It really gave me a leg up when applying for internships and jobs within my field.”

Beck secured an internship while at Holy Family University with Tonic Design Co., working with the Web Development team. Post-graduation, Beck parlayed that internship into a full-time position with the company, but not without some help. Beck credits Dr. Jan Buzydlowski as a major influence in her success, especially his Structural Programming class.

“I was doing all kinds of stuff from coding email templates to editing CSS sheets for our clients while I was an intern,” Beck said. “I started to get pretty good at programming in JavaScript, so they started letting me do more complex tickets. This was right around the time I was taking a class taught by Dr. Buzydlowski. It changed the way I thought about forming methods and functions. This was the class that pushed me to learn Objective-C—the programming language used for iOS.”

Now with her foot firmly planted in the iOS programming world, Beck looks back on her time at Holy Family University fondly.

“Holy Family taught me to think outside of the box and not stop working until you came up with not only an answer, but the right solution,” she said. “I owe a good deal of my success to Dr. Buzydlowski. He is an incredible professor and mentor.”

Computer Information Systems is an interdisciplinary program combining business administration and computer science giving a graduate an understanding of how systems work, how to manage them, and how to create them.