It's a simple fact that many of the students and alumni of Holy Family University are fans of the Philadelphia Eagles football team. After all, the Eagles play their home games less than 20 miles away from the University’s Philadelphia campus. 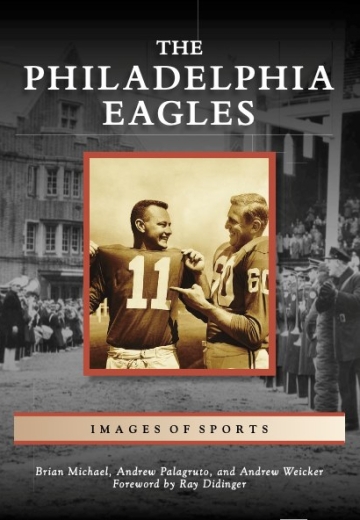 Two University alumni and a former professor recently published The Philadelphia Eagles: Images of Sports, a new book of photographs documenting the history of Philadelphia football released by Arcadia Publishing & The History Press. The book is compiled from more than two dozen sources—featuring rarely seen and never-before-published archival and personal photographs—including many photos shot by Ed Mahan, who served as the team photographer for the Eagles for over five decades.

Michael reached out to his former students, Andrew Palagruto ’18 and Andrew Weicker ’18, to help him compile the photos for the publication. Michael knew they were the right co-authors for the job: Both of the alumni are multi-generational Eagles fans. Palagruto grew in South Philadelphia close to the sports complex, while Weicker is the founder of the popular Philadelphia Eagles Frenzy Facebook page and fan website.

“Where I grew up I lived it took five minutes to walk to the South Philadelphia Sports Complex,” says Palagruto. “Living within walking distance, you can’t help to be engulfed in the atmosphere. You weren’t allowed to wear anything non-Eagles around where we lived!”

Hall of Fame football journalist Ray Didinger wrote the foreword for the book about the generational impact football fandom has amongst family members. “It’s a beautifully written piece worth reading just by itself,” Michael says.

In addition to documenting decades of Eagles history, The Philadelphia Eagles: Images of Sports also focuses on Philadelphia’s pre-Eagles football history. Holy Family University students would likely be surprised to learn that a National Football League team, the Frankford Yellow Jackets, played its home games at Frankford Stadium less than five miles southeast of where the University’s Philadelphia campus stands today. The team existed from 1924 to 1931, folding a season after Frankford Stadium was destroyed by a fire and two years before the Eagles would host their inaugural season at the Baker Bowl. The Yellow Jackets won the NFL championship in 1926.

“For me, from living in the Frankford area I think the most gratifying thing was learning the history of the Yellow Jackets,” explains Weicker. “Just thinking about how there was a pro football team on Frankford Avenue—and that I took Frankford Avenue back and forth from Holy Family—was mind-blowing.”

The three authors are set to speak about the history of Philadelphia football and their book at The Historical Society of Frankford on December 14, 2021 at 7 p.m.

Copies of The Philadelphia Eagles: Images of Sports signed by the three authors are available at Shibe Vintage Sports.